Tel Aviv may not be the place one associates with the Holy Land; nevertheless, the
ancient port city of Jaffa is mentioned in the Bible - the Old Testament and the New
Testament - in numerous contexts. Jaffa served as the gateway to the Land of Israel in
biblical times: Hiram of Tyre sent the cedars needed to build King Solomon’s Temple
through the Old Jaffa Port, while the prophet Jonah set sail from Jaffa on his ill-fated
voyage, invoking the wrath of God by refusing to upbraid the residents of Tarshish.
Despite being the port closest to Jerusalem, Jaffa contains no sites sacred to Judaism,
but the ancient settlement was important to the development of early Christianity. For
the Christian visitor to Tel Aviv, what is arguably the most significant reference to Jaffa is
the Vision of St. Peter (Acts 10: 1-48). As it is written (10-15):
The traditional site of this vision is reached by descending the stairs down to the port, to
Simtat Shimon Habourskai (Simon the Tanner Lane) and continuing until the entryway to
the building, marked by a sign indicating that this is the House of Simon the Tanner. St.
Peter was Simon’s guest, and it was while staying here, the Acts of the Apostles relates,
that Simon had a vision in which he was instructed to proselytize among the non-Jews,
too.

For many years this house and courtyard have belonged to members of the Zacharian
family, who also guard the lighthouse in the courtyard, which lights the way for Jaffa’s
fishermen.
“And he [Simon Peter] became very hungry and would have eaten; but while they made
ready, he fell into a trance. And saw heaven opened, and a certain vessel descending
unto him, as it had been a great sheet knit at the four corners, and let down to the earth.
Wherein were all manner of four-footed beasts of the earth and wild beasts and
creeping things, and fowls of the air. And there came a voice to him. Rise Peter; kill and
eat. And the voice spake unto him again the second time. What God hath cleansed, that
call not thou common.”
This vision, central to the universality of the Christian gospel, took place in Jaffa, on the
roof of the house belonging to Simon the Tanner, which for the past 800 years has been
the focus of pilgrimage visits to the Holy Land. A picturesque building stands on the site
of Simon the Tanner’s original house, overlooking the lighthouse, but for judicial reasons
it is closed to visitors and can only be viewed from outside. Another important Christian
landmark in Jaffa is the site of the building - a church for many centuries - where St. Paul
was jailed before being released to Rome, to stand trial.

Not a part of Jaffa, technically speaking, but adjacent to it, and of great interest to
Christian visitors, is the grave of Tabitha in South Tel Aviv. As it is written in Acts 9: 36-
42, Peter was summoned from Lydda (modern-day Lod) to Jaffa, upon the death of
Tabitha, known far and wide for her charitable works: “But Peter…kneeled down, and
prayed: and turning him to the body said, Tabitha, arise. And she opened her eyes; and
when she saw Peter, she sat up. And he gave her his hand, and lifted her up, and when
he had called the saints and widows, presented her alive. And it was known throughout
all Joppa [Jaffa]; and many believed in the Lord.” (40-42).

Jaffa also has a place in Greek mythology. According to legend it was on the rock off
Jaffa’s shore that the beautiful Andromeda was chained by Poseidon but was
subsequently rescued by Perseus. Andromeda’s Rock can still be seen in the Old Jaffa
Port, as well as a bronze statue of the lovely Greek maiden. 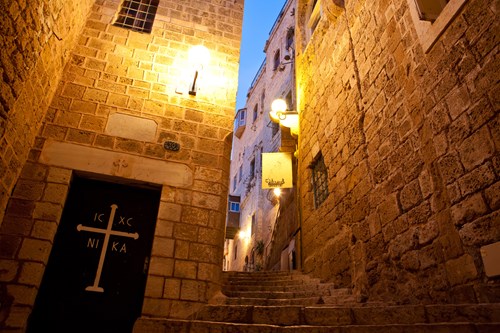